Uber Is Back on the Road! 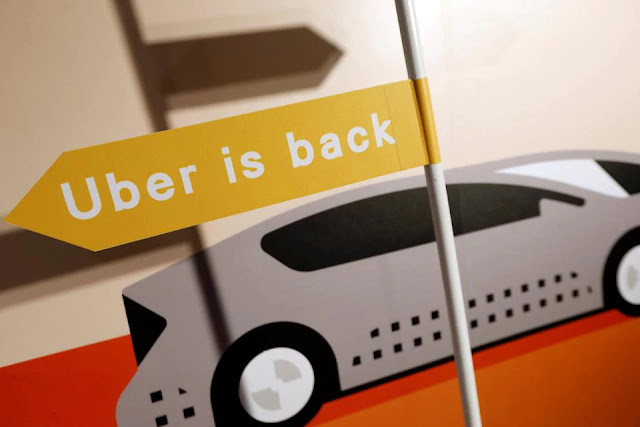 The Land Transportation Franchising and Regulatory Board (LTFRB)) has lifted its suspension to Uber after being off the road for 15 days. Uber can now start serving passengers again after the company fully complied with its requirements.
This Tuesday, August 29, 2017 at 4:48 p.m., Aileen Lizada LTFRB board member said 36,000 drivers nationwide of the transportation network company (TNC) could resume its operations. 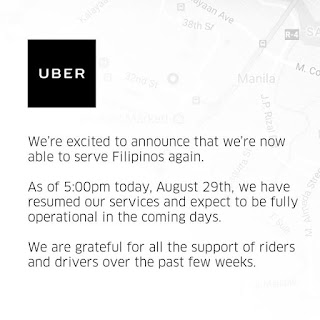 A P190-million fine was paid by the company and provided financial assistance to the drivers during the suspension period.

Uber even stated on its blog, "To make up for the lost time, you're qualified for new incentives everyday starting Tuesday, August 29, 6 pm until Fridady, September 1, 12 am. Check the Promotions Tab in the Uber Driver App each day to know the details of the incentive. We hope you'll make the most out of these until we resume our regular incentive schedule on Friday."

Uber was supposed to serve a month long suspension ending on Sept 15 for not complying  LTFRB's order not to accept accredit new drivers into its platform.

Meanwhile, netizens on social media celebrates to LTFRB's decision to lift the suspension. 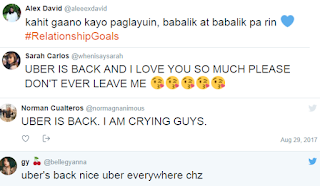 "Uber is Back" is one of the trending topics in the Philippines shortly after LTFRB's announcement. 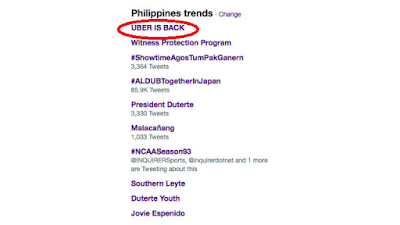